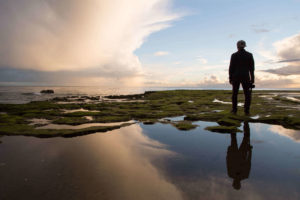 A personal reflection from a patient at Brighton Recovery Center:

My name is _____, I’m 35 and I’m an addict. My drugs of choice where alcohol and prescription pain medications. I grew up in a very caring and loving family with both parents and two brothers. Drugs where not a part of home life and alcohol was rarely consumed.

I took my first drink in 8th grade from a friends parent and by the the time I was a senior in high school I was experimenting with many different drugs. I was able to maintain good grades and graduated with honors. Eventually the drugs faded but the alcohol use became regular as soon as I was 21.

I came out as gay at age 25 and started hitting bars and parties and continued to increase my use of alcohol.

At age 28 I got my first attack of pancreatitis. I completely denied my use of alcohol.  I was hospitalized for 2 weeks and was put on a feeding tube. This is the first time I was given narcotics for pain.

After I was out I refused to believe that alcohol was the problem and convinced those around me. I went through several doctors, test, procedures and medications. Through this I was also given a steady prescription of Lortab. Over a year I built up a tolerance for the pills and alcohol and could never seem to get enough. I soon was buying or manipulating people out of their prescriptions and getting doctors to increase the dosage.

At age 30 I had exhausted all avenues a getting drugs and soon felt the effects of withdrawal. I checked into a hospital detox center and after I was offered counseling and therapy. I refused. I thought my only problem was the drugs and with them gone I would be fine. After 6 months I started drinking again and it soon became regular. I started having attacks of pancreatitis which increased over the years. As the attacks came back so did the prescription pain meds. My family became concerned over my alcohol use and begged for me stop or even just hold off until I could get my health back. No matter how hard I tried I could not stop or even cut back. It consumed my life. Eventually I accepted that this would be my life. As I built up a tolerance to the pain meds I was referred to a pain clinic. I was soon on fentanyl, morphine and and oxycodone.  Eventually I still could not get enough and was buying or stealing prescriptions from friends and family. Death would have been a welcomed side effect.

In 2015 I had a severe attack of pancreatitis and was hospitalized. I was down to 98lbs and was sent home with the feeding tube still in place. I was put on disability from work and had a home nurse that would check on me every other day.

I had told my family I was no longer drinking but I had started to inject the alcohol through the feeding tube and still abusing the narcotics. Eventually they caught on and tried everything they could to prevent me from getting alcohol. They had taken my ID, credit cards and keys. I found a sprare key and some cash. I was still allowed to pick up my prescriptions. In a desperate search of the house to find alcohol, pills or cash I found an almost empty bottle of rubbing alcohol. I put some in a syringe and injected it through the feeding tube. I found a spare key and some cash a ran to the store to buy a new bottle. As soon as I got home I took the rest of the pills I had, swallowed a fentanyl patch and I filled the syringe with rubbing alcohol and pushed it through the tube. I can remember screaming in my head don’t do it your not going to live through this. I had absolutely no power to stop.

My mom and brother found me unresponsive and rushed me to the hospital. I was transferred to another hospital for a two week detox, then to Brighton’s residential rehab for 45 days and 3 months in their intensive outpatient program. During my stay in Brighton I introduced to Alcoholics Anonymous and Narcotics Anonymous and continue to attend meetings regularly.

Today I am one week away from having a year clean and sober. After going through treatment and therapy I have realized not only am I powerless over drugs and alcohol but they were a symptom of a deeper problem. Growing up gay I always kept a focus on how I was different. I was shy and kept to my self and had little friends. Drugs and alcohol became my escape. When I came out at 25 I had accepted that I was gay but still did not have any self acceptance. I believed I had no value and used drugs almost as a form of punishment. I thought if people had known the real me there was no way they would love me.

In recovery I’ve learned that the opposite of addiction is not just sobriety, its connection. I’ve been able to repair relationships with friends and family and make new and meaningful relationships with people on same path of recovery. I’ve become honest with my self and those I love. Today I can say I love myself and it’s safe for others to love me.

Contact Brighton Recovery Center to get yourself or a loved one on the road to recovery.

Why is community important in the recovery process?

Why Stigma is Destructive to Mental Health and Addiction Recovery