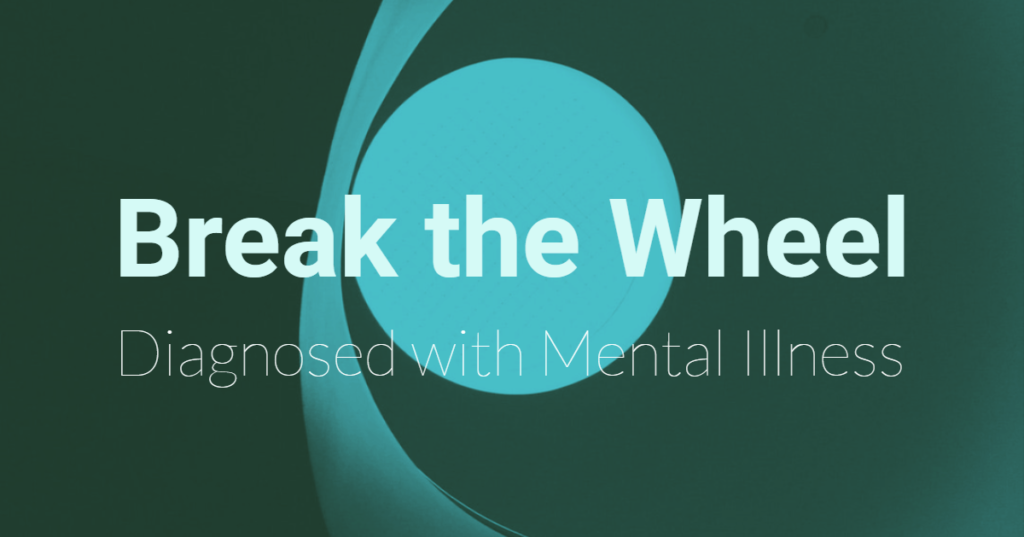 “My father was diagnosed with Paranoid Schizophrenia when he was 26”Why is it that we believe we are tainted so severely when we have been diagnosed with a mental illness?  Why does the stigma of imperfection infect our minds to the extent that it only compounds the struggle that is already put before us? We know that approximately 1 in 5 adults in the U.S. (46.6 million) experiences mental illness in a given year. Approximately 1 in 25 adults in the U.S. (11.2 million) experiences a serious mental illness in a given year that substantially interferes with or limits one or more major life activities. But knowing this somehow does not allow us to feel any less inadequate. Knowing this does not alleviate the cognitive distortions that tell us that we are less than.

My father was diagnosed with Paranoid Schizophrenia when he was 26 years old. He would tell you, “I used to be a Paranoid Schizophrenic but when the DSM V came out, I just became an old garden variety Schizophrenic.” My days as a child after my parents divorce were spent making sure Daddy took his medication each day so that he did not start talking to people that were not there and recounting historical events that even an 8 year old new were false. But these days came often. Because any good Schizophrenic goes through times were they believe they are cured and there is no longer a need for meds. Any good Schizophrenic knows there are days when they just don’t want to feel the side effects of the meds. “They make me so groggy,” I would hear often.

” I grew up wanting to hide this illness from the world”As a kid, the trick to knowing when I could have friends over was to know if Daddy was truly taking his meds that day. Or was this a day when he was cheeking them. I grew up wanting to hide this illness from the world and those closest to me. As I got older, I learned some of the facts surrounding Schizophrenia. I learned that men tend to develop schizophrenia slightly earlier than women; whereas most males become ill between 16 and 25 years old, most females develop symptoms several years later. The average age of onset is 18 in men and 25 in women. Upon learning this, I was certain that this was my destiny and I implanted a ticking time bomb in my psyche that led to significant anxiety and was exacerbated by the excessive use of psychedelics, which I abused as a young adult. Once out of the psychological danger zone, I later worried about my daughter and the hardships she would face if she succumbed to this fate.

I recently was lucky enough to work with a client and her family.  The client needed to be hospitalized for stabilization and was put on Risperdal, which is an antipsychotic. I was speaking with the woman’s father about the lasting affects of her psychotic break. He explained to me his fears associated with the struggle his daughter would now have to endure if these delusions became permanent. I listened and processed his pain and fears. I took into account my transference that I was experiencing and then carefully wove a response that I still feel was some of my greatest work as a therapist. I explained to him that we have new medications today that are far and beyond anything he was familiar with. We have therapeutic approaches and facilities that can abolish any image that still lingers in our heads from the film One Flew Over the Cuckoos Nest.  We have socially conscious individuals that are strong enough to step out of the spotlight of Hollywood and tell the world that they suffer from mental illness. We have ADA laws and exemptions that level the playing field so that individuals who suffer from mental illness can now receive a fair shake. As a society, we have a broader understanding for the diversity of this nation and greater understanding for the needs of others. And overall, we can safely and genuinely believe today that it is ok to be imperfect, for me and for my loved ones. The father began to cry and thanked me. He told me that this was exactly what he needed to hear.  And as I walked away, I realized that it was exactly what I needed to hear, too.

Charlie Osborne is a Masters level Therapist at Brighton Recovery Center. For more advice from experts like Charlie, visit our addiction recovery blog or YouTube channel.

Tips for Talking about Trauma

Addressing the Underlying Issues of Addiction